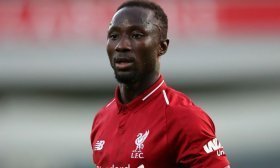 TRANSFER LING Liverpool could land Jude Bellingham in swap transfer with Naby Keita moving to Dortmund
... , 19, has attracted a raft of transfer interest from the likes of Manchester United, Manchester City, Chelsea, Real Madrid and of course the ...
27/09 12:16

Liverpool will make a fresh approach for PSV midfielder Ibrahim Sangare in January, according to Calciomercato.

Liverpool midfielder Naby Keita could return from injury ahead of Guinea's international friendlies against Algeria and Ivory Coast.

Liverpool manager Jurgen Klopp is considering a transfer deadline day move for Sheffield United's midfielder Sander Berge, with the Norway international set for Anfield to play as backup in the club's midfield. Berge has just begun his fourth season for the Championship side, and is valued at around £25 million by his club.

Juventus are considering an approach to sign Liverpool midfielder Naby Keita during the summer transfer window.