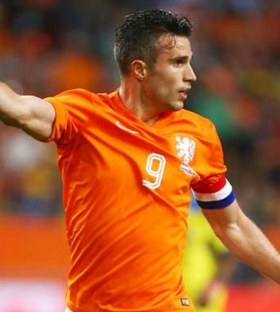 Manchester United have reportedly emerged as serious favourites to sign Edinson Cavani when his contract with Paris Saint-Germain expires at the end of the season.

Former Manchester United star Robin van Persie has urged the Red Devils to land the services of Edinson Cavani on a free transfer when his contract with Paris Saint-Germain concludes in the summer.

Former Manchester United and Arsenal star Robin van Persie believes the Red Devils should consider a move for Edinson Cavani when his contract concludes with Paris Saint-Germain in the summer.

Former Arsenal and Manchester United star Robin van Persie has said that Paul Pogba needs to settle into a position with the Red Devils, where he can contribute regularly towards the team's attacking display.

Arsenal are understood to have placed a price tag on the head of Pierre-Emerick Aubameyang and they could be prepared to sell, provided the valuation is matched.

What a time to be an Arsenal fan. Have the Gunners finally found their long-term successor for club legend Thierry Henry?

Arsenal striker Olivier Giroud has emerged as a prime target for Turkish giants Fenerbahce, who are looking for a potential replacement for Robin van Persie.

Former Arsenal and Manchester United striker Robin van Persie could reportedly rejoin Feyenoord from Fenerbahce in the New Year. The Netherlands international came close to leaving the Istanbul giants in the summer, but a deal never materialised.

Petr Cech: 'We know we can beat Chelsea'

Arsenal's first-choice goalkeeper Petr Cech is adamant that his side are capable of beating Chelsea in Sunday's Premier League game at Stamford Bridge.

Arsenal manager Arsene Wenger has confirmed that the likes of Mesut Ozil and Aaron Ramsey will be rested for the Europa League opener against Koln on Thursday night.

PSG to move for Alexis Sanchez after world-record Neymar swoop

French giants Paris Saint-Germain will reportedly lodge a formal offer for Arsenal forward Alexis Sanchez as soon as they complete the signing of Neymar from Barcelona.

Chelsea manager Antonio Conte has spoken of his admiration for Tottenham Hotspur striker Harry Kane, saying that he is "one of the best strikers in the world", before suggesting that he is worth at least £100 million.

After collapsing during a friendly match on Saturday, 20-year-old Ajax midfielder Abdelhak Nouri has suffered "serious and permanent brain damage", with the Dutch giants explaining that he has no chance of recovery.

Chile international Alexis Sanchez is willing to snub interest from Manchester City to stay at Arsenal, should they accept to his demands.

Turkish club Fenerbahce have dismissed suggestions that the club could lodge a late attempt to sign Dani Alves ahead of Manchester City.

Van Persie to join The Eagles?

Robin van Persie is being linked with a Premier League return to join up with fellow Dutchman Frank De Boer at Crystal Palace. The former Arsenal and Manchester United striker has been playing his football with Turkish club Fenerbahce for the last two seasons.