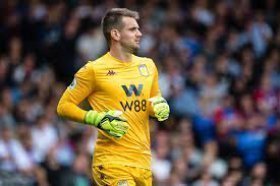 Manchester United manager Ralf Rangnick has confirmed that Edinson Cavani and Tom Heaton will be sidelined for the Premier League trip to Leeds United.

Ajax have their sights on landing Dean Henderson on loan during the January transfer window.

Manchester United have confirmed their third signing of the summer transfer window in Raphael Varane.

Manchester United goalkeeper David de Gea has no plans of leaving the club during this summer's transfer window.

Manchester United are prepared to part ways with Dean Henderson amid concerns over his attitude.

Manchester United are exploring the prospect of re-signing former goalkeeper Tom Heaton on a free transfer.

Aston Villa are reportedly confident of signing Emiliano Martinez after the Argentine turned down a new Arsenal contract.

Premier League side Aston Villa have confirmed the signing of Danny Drinkwater on a short-term loan agreement from Chelsea.

Liverpool manager Jurgen Klopp has reportedly set sights on pursuing Nick Pope from Burnley as he attempts to solve the club's goalkeeping issues.

West Ham United are reportedly considering a move for Burnley goalkeeper Tom Heaton with Joe Hart expected to return to Manchester City after the conclusion of his loan contract.

Burnley goalkeeper Tom Heaton has no desire to switch clubs in the summer following a top season with Sean Dyche's side this term.

Newcastle and Crystal Palace to compete for England goalkeeper

Newcastle United and Crystal Palace are both teams on the up. After a season in the Championship, Newcastle will be back in the Premier League next season and since the arrival of Sam Allardyce, Crystal Palace are now pushing for the top half of the Premier League. Both teams are set to compete this summer for the signature of an England goalkeeper.