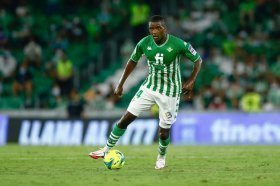 Arsenal are prepared to revive their long-term interest in signing Sporting Lisbon midfielder William Carvalho, according to Fichajes.

In an interview with Estadio Deportivo, Argentine midfielder Guido Rodriguez said that he is aware of the transfer interest from Arsenal.

West Ham manager Slaven Bilic wants to sign Jack Wilshere from Arsenal on transfer deadline day. The midfielder has told Arsenal that he would like to leave the club in search of regular first-team football.

West Ham pull out of deal for William Carvalho

Portuguese international midfielder William Carvalho will not be moving to the Premier League after all. West Ham have pulled out of discussions to sign the Sporting Lisbon star.

West Ham United have yet to lodge a formal approach to sign Sunderland midfielder Didier Ndong. The Hammers have earmarked the Gabon international as a suitable alternative to Sporting's William Carvalho.

West Ham will turn their attentions from William Carvalho and instead make a move for Sunderland defensive midfielder Didier Ndong this summer. The 23-year-old Gabon international joined the Black Cats from Lorient in the summer of 2016/17.