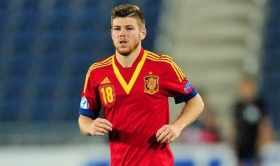 ‘Very aggressive’: Player Tottenham sold for £13m earns praise v Liverpool as BT duo impressed
and Alberto Moreno are all in the Villarreal squad after being with Premier League clubs. Another such player is defender Juan Foyth, who
04/05 19:00

Spanish international defender Alberto Moreno has made a transfer back to his home country with a deal being completed to join Villarreal. The Yellow Submarines have agreed a three year contract with the left-back, who will arrive for pre-season training with his teammates next week.

Arsenal are reportedly continuing their search for a new left-back as they fear the prospect of losing Nacho Monreal at the end of the current campaign.

Liverpool defender Alberto Moreno is reportedly keen on seeking a return to the Spanish La Liga after dropping down the pecking order at Anfield.

Spain international Alberto Moreno could reportedly part ways with Liverpool in the near future with former club Sevilla seemingly keen on his signature.

Liverpool defender Alberto Moreno has reportedly emerged as a cut-price option for Barcelona as they aim to bolster their backline in the January transfer window.

Liverpool will aim to continue their perfect start to the season when they entertain Chelsea in the third round of the League Cup on Wednesday night.

Liverpool defender in no rush to sign new contract

Liverpool full-back Andrew Robertson is reportedly in no rush to extend his Reds contract despite the recent speculation pointing towards a payrise.

Liverpool have reportedly joined the pursuit of Chelsea ace Kenedy, who has impressed during the second half of the Premier League campaign.

Pundit Rio Ferdinand has praised Virgil van Dijk for bringing out the best in Liverpool full-back Andy Robertson. The Anfield club signed Robertson in a £8 million deal last summer and has since impressed since playing at the left-back position for the Reds.

Liverpool play host to Porto in the second-leg of the Champions League round of 16 tonight. The Reds are pretty much through the quarter-final stage of the competition after a 5-0 triumph over the Portuguese outfit on the road, but they will want to guard against complacency with another strong showing.