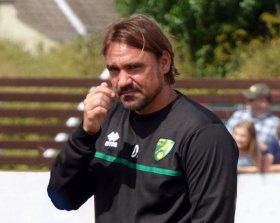 Bodø/Glimt boss Kjetil Knutsen's clear message amid links with Brighton managerial vacancy
... phase. 53-year-old Knutsen has also been linked with a Premier League job in the past. He was heavily touted to become Daniel Farke’s ...
14/09 12:30

Newly promoted Premier League side Norwich City have sealed a season-long loan deal for Scottish international Billy Gilmour from Chelsea. Gilmour caught the eye with an impressive display for his country against England during the Euro 2020 tournament.

Chelsea to loan out Billy Gilmour next season

Chelsea are open to loaning out Billy Gilmour next season to earn valuable first-team experience, The Athletic claims.

Arsenal have been handed a boost in signing Emiliano Buendia with Norwich City willing to sanction his departure this summer.

Arsenal may have to pay around £50m in order to prise away Emiliano Buendia from Norwich City during the current transfer window.

Arsenal have reportedly made contact with the representative of Norwich City attacker Emiliano Buendia.