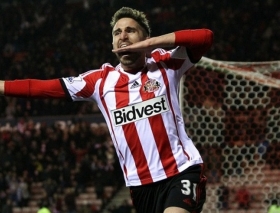 West Ham United are reportedly said to have expressed an interest in signing Fabio Borini from AC Milan. The Italy international recently made his switch to San Siro permanent after impressing on a season-long loan from Sunderland last term.

Calhanoglu to Milan a done deal

After Milan officially signed Fabio Borini yesterday, it looks like they are about to complete the signing of another player in the coming days.

AC Milan have completed the signing of Sunderland striker Fabio Borini on an initial loan deal with the option of making it a permanent signing at the end of the coming season.

Borini to have Milan medical tomorrow

AC Milan have reportedly completed the signing of Sunderland striker Fabio Borini who will have his medical tomorrow morning according to Gazetta as well as Di Marzio.

Italian striker Fabio Borini is on the cusp of a move back to his homeland. The Sunderland striker has agreed to terms with Serie A giants Lazio and will reportedly pen a four-year contract with the San Siro based club.

Sunderland have confirmed the arrival of former West Bromwich Albion striker Victor Anichebe on a Bosman. The Nigerian forward was out-of-contract following his release from the Baggies at the end of last season.

Lazio will reportedly revive their interest in Sunderland forward Fabio Borini at the end of the season. The Serie A side had been linked with a move for the Italian before he made his way to Sunderland from Liverpool last year.

Sunderland were never interested in a summer deal for Senegalese striker Moussa Sow, according to reports.

Liverpool are understood to have agreed a fee for the transfer of striker Fabio Borini to Sunderland.