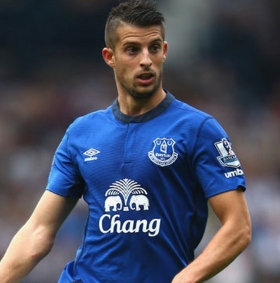 'Couldn't really open up' - Graeme Jones' emotional Newcastle bond as pal and players explain role
on instructions to Kevin Mirallas ahead of the winger coming on for Everton against Swansea City at the Liberty on April 11, 2015 Unlike
04/02 13:31

Everton owner Farhad Moshiri is reportedly planning a shock move for Atletico Madrid's Diego Costa as he aims to make a statement signing for the club.

Kevin Mirallas sad at missing out on Olympiacos return

Everton winger Kevin Mirallas has revealed that he was eager to link up with former club Olympiacos only for the Toffees to block his proposed return to the Greek giants.

West Ham are looking to snap up Everton attacking midfielder Kevin Mirallas from Everton on transfer deadline day. According to multiple reports, West Ham will pay a fee of around £15 million to sign the Belgium international next summer but the player arrives initially on loan.

Everton have reportedly knocked back a loan approach from West Ham United for Belgian winger Kevin Mirallas. The 29-year-old has spent the past five seasons with the Merseyside outfit, contributing 38 goals in 177 appearances across all competitions.

Arsenal are rumoured to have tabled an offer for Everton's out of favour attacker Kevin Mirallas. The Toffees have been busy on the transfer market this summer and have signed several attacking midfielders as a replacement for Mirallas.

Everton winger Kevin Mirallas has emerged as a target for Turkish giants Fenerbahce as it emerges that the Belgium international appears to not be part of manager Ronald Koeman's plans for the club.

Amid speculation of one unsettled Belgian at Goodison Park, with Romelu Lukaku looking set to leave in the summer, another has committed his future to Everton by signing a new three year contract. Kevin Mirallas will now remain in Merseyside until 2020.

Lukaku scores again as Everton move in on top five

Everton beat West Brom at Goodison Park on Saturday afternoon, as they moved to within three points of the Premier League's top five, giving them the chance to qualify for next season's Europa League.

Everton boss Roberto Martinez has hinted that Kevin Mirallas could leave the club during the winter transfer window.

Everton attacker Kevin Mirallas has been linked with a move back to Ligue 1, according to reports.

Belgian international Kevin Mirallas is reportedly considering a January exit from Everton due to fears of missing out on next summer's European championships.

Belgian winger Kevin Mirallas could end speculation over his future by signing a new long-term contract at Everton.

West Ham United will come up with a renewed bid for Kevin Mirallas, after their initial bid of £6m was knocked back by Everton.

West Ham United have made a £6m to sign up Everton winger Kevin Mirallas, The People reports.