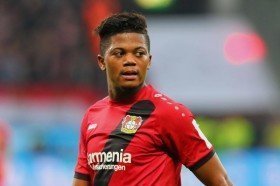 Aston Villa have confirmed the surprise signing of Danny Ings from Southampton.

Manchester United reportedly held talks with the agent of Leon Bailey during the January transfer window.

Arsenal and Manchester United will reportedly monitor the performance of Bayer Leverkusen attacker Leon Bailey in the Europa League on Thursday night.

Man City, Man Utd and Chelsea have all joined the race to sign Bayer Leverkusen's talented attacker Leon Bailey during this summer transfer window. The Jamaican international, 22, has caught the eye in the Bundesliga and now looks set to make a move to the Premier League.

Arsenal could reportedly go head-to-head with Chelsea in the race to sign Leon Bailey from Bayer Leverkusen during the summer transfer window.