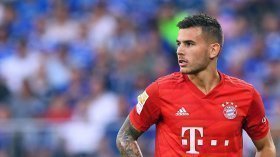 Manchester United have reportedly joined Barcelona and Real Madrid in the race to sign Lucas Hernandez.

Chelsea have been handed a blow in signing Bayern Munich defender Niklas Sule this summer.

Chelsea have made an offer to sign Bayern Munich defender Niklas Sule, a report from German outlet Abendzeitung claims.

The Most Expensive Football Transfers in 2019

Even in countries where it's not a national sport, association football is among the most followed sports.

Spanish giants Atletico Madrid are reportedly confident of securing the signature of defender Marcos Alonso from Chelsea this summer.

Manchester United and Arsenal have received a boost in signing Jerome Boateng with Bayern Munich president Uli Hoeness admitting that the central defender should part ways with the side.

Atletico Madrid are reportedly looking into a summer deal for Chelsea's Marcos Alonso as they seek to reinforce their options on the left side of the backline.