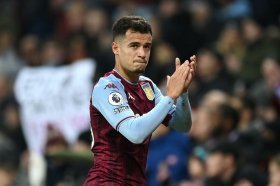 Barcelona are looking at the prospect of landing Chelsea striker Romelu Lukaku this summer, Marca claims.

Arsenal back in the race for Barcelona man?

Arsenal are prepared to revive their long-term interest in Philippe Coutinho this summer, according to Mundo Deportivo.

Arsenal could attempt to sign Philippe Coutinho if Aston Villa are unable to afford a permanent deal this summer, Sport claims.

Philippe Coutinho has dropped the biggest hint yet that he will stay at Aston Villa on a permanent basis. The Brazilian attacking midfielder, who has joined Villa on loan from Barcelona, has 18 months remaining on his deal in Spain but has told reporters that he wants to return to England.