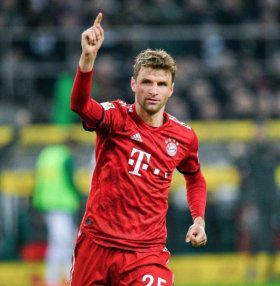 Bayern Munich are planning a surprise approach for Mason Mount if he fails to agree a new contract with Chelsea.

Germany international and World Cup winning midfielder Thomas Muller is not seeking a move away from Bayern Munich to join a top Premier League club, despite the reported interest of Manchester United in the player. Muller, who has suffered a dip in form over recent seasons, is a long-term target for numerous English sides but it is Man Utd who retain the most significant interest in the talented playmaker.

Manchester United are reportedly set to make a double signing from the Bundesliga. According to reports, Ed Woodward has approved moves for starlet Kai Havertz and the Bayern Munich wantaway Thomas Muller for a combined fee of £125m. Havertz is on the wishlist of every top club in Europe and the Leverkusen youngster has the potential to become one of the best attacking-midfielders in the world.

Thomas Muller has reportedly made no contact with the representatives of Manchester United unlike speculated in the media earlier this week.

Manchester United have reportedly made an initial approach to Bayern Munich to pursue the services of Thomas Muller at the turn of the year.

Manchester United and Liverpool to compete for German star?

Manchester United and Liverpool will reportedly battle it out to secure the signature of Thomas Muller from Bayern Munich in January.

As we reach the halfway point of the World Cup, one of the teams that have caught the eye the most for me is Croatia. Having set aside Denmark on penalties, Croatia are headed for the quarter finals.

Former Manchester United manager Louis van Gaal has revealed that the Red Devils had expressed an interest in signing both Thomas Muller and Mats Hummels during his time at Old Trafford.

German champions Bayern Munich are planning to revive their interest in Arsenal attacker Alexis Sanchez during the winter transfer window.

Bayern Munich forward Thomas Muller is reported to have snubbed the opportunity to join Liverpool during this summer's transfer window.

Bayern Munich attacker Thomas Muller has admitted that he contemplated a move to Manchester United a couple of seasons ago.

The arrival of James Rodriguez has opened up the door for Thomas Muller's switch to Manchester United, with Mourinho looking to sign another top-class forward.

Robert Lewandowski was extremely vocal about his teammates and the lack of help he received in the last few games of the Bundesliga which denied him the top scorer award.

Chelsea and Manchester United were front runners for the Belgian international after he turned down a contract extension at Everton, however, Bayern Munich have now emerged as favourites to land the striker.

Bayern Munich boss Carlo Ancelotti is prepared to cough up a significant sum in order to sign Alexis Sanchez from Arsenal in the summer.