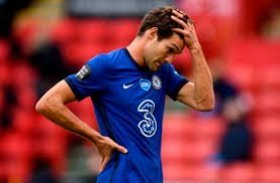 ‘I’ve always wanted this’ – Marcos Alonso delighted to have left Chelsea for Barcelona
La Liga club.Chelsea news, exclusives and analysisThe 31-year-old has completed his long-awaited move to the Camp Nou from Chelsea, having ...
07/09 13:00

Chelsea midfielder offered himself to Barcelona?

Chelsea have finally completed a deal to sign Gabon international forward Pierre-Emerick Aubameyang from Barcelona, with the forward arriving at Stamford Bridge in a deal worth £12 million that sees defender Marcos Alonso move the other way. The former Arsenal striker only just moved to Spain for a free transfer in January, and proves a lucrative deal for the Nou Camp side.

Chelsea could end their interest in Barcelona forward Pierre-Emerick Aubameyang, according to Marca.

Chelsea have not given up on landing Barcelona striker Pierre-Emerick Aubameyang, according to Fabrizio Romano.

Chelsea are planning to hold a fresh round of negotiations with Barcelona for Pierre-Emerick Aubameyang.

Chelsea are planning a surprise move for Crystal Palace attacker Wilfried Zaha amid their struggles to sign Pierre-Emerick Aubameyang.

Pierre-Emerick Aubameyang has his sights on joining Chelsea despite the transfer interest from Manchester United.

Chelsea are keen on signing Brentford striker Ivan Toney, according to The Mirror.

Tottenham have made a last ditch offer to sign Memphis Depay from under the noses of Juventus, with Spurs' director of football Fabio Paratici contacting the Dutchman's agent with regards to a potential return to the Premier League. Depay is likely to leave Barcelona after just two years on a free transfer, and Juventus have already made a generous offer to the Netherlands international forward.